Since Kieran last signed off alot has happened. Unfortunately due to the lack of spare time and the lack of WiFi, it is a lot harder to keep everyone updated, so we are sorry for the delay in writing these blog updates.

We left you as we crossed over the Mississippi into Iowa. We spent the night in Davenport with Dustin. We decided to kick off the next day and try and reach West Branch. We had spoken to a lovely lady Kathy, via couchsurfer, who had agreed to put us up for a couple of days, which was a welcomed rest for us. At this point we had been non stop for over a week. Our legs where tight and bodies bruised.

We where told that Iowa was flat, well they where wrong, so very very wrong. Iowa is nothing but hills. You whiz down one side to climb the heights of the other, hoping that when you can see over the top you will be greeted by a flat road that travels for miles ahead. Instead you are met by miles and miles of rolling hills; and remember we are pulling trailers weighing over 110 lbs each, which obviously makes the hills a complete nightmare.

When we reached West Branch we where met by Kathy, her husband John and their daughter. They gave us a tour of there lovely house, filled with some amazing art work. We where stationed in the massive guest bed room in the basement. That first night we went to sleep early, we needed the rest because the next day was “Hoover’s Hometown Days”.

Some of my Favourites at Kathy’s

West Branch is the birth town of the 31st President, Herbert Hoover. So every year they celebrate his birthday with the “Hoover’s Hometown Day”. The whole town comes to a stand still. Filled with stalls, peddling various delights from homemade lemonade to water fight competitions.

We walked into town from Kathy’s house later than Kathy and John. We had used the morning to catch up on some needed sleep. When we got to town we where met first by the “Hoover Ball” tournament. Hoover Ball is basically volley ball, accept you actually catch the ball before throwing it back over the net, and the ball is actually a 12 lbs medicine ball.

Kieran and I thought we would try our hand, and maybe show the American’s how its done, very much like our game of beer pong in Chicago (unbeaten Chicago Champions); but these guys take there Hoover Ball seriously. We where unfortunately not allowed to step foot on the court. It turns out these guys had been training all year for this competition, the only one in the country. In my opinion they where just scared, but we agreed to give any help and tips we could from the sidelines. Turns out just like volley ball, its more interesting to watch the women’s games.

We then wandered into town. Its a beautiful place. Home of Hover’s presidential library and museum, so we made this our next stop. The grounds of the library are beautiful, a huge expanse of meticulously mowed lawn, with large oak trees all around. It was also the same location as Mr Hoovers childhood house, which was a tiny one bedroom shed. His grave is also on the site, which is a lovely understated marble plaque, which has clear view across the grounds to his old house.

The Museum was very interesting. A little history lesson here for you all. Herbert Hoover is remembered by most American’s as the Depression president, he was inaugurated a year before the stock exchange crashed, an inevitable disaster after the boom of the 1920’s.

Unfortunately due to this terrible timing, Hoover’s name will be associated with the great depression. BUT what we found out was that Hoover did a lot more during his long life. After the first world war Hoover set up the American Relief  Administration, and helped to feed the starving all over Europe. Alot of children had never eaten a white bread roll before, they where eating a mix of dough and wood chipping, until the Hoover Rolls arrived all across Belgium and eastern Europe. What a hero.

He was a great chap, and we both realised that it was a terrible shame that he is remembered for his Hooverville shanty towns and the dust bowls across the american prairies, when he was so much more, the Hoover Dam is a great landmark in his name. Something he commissioned to get people working again during the depression.

Hoover getting help from Steph’s Ted.

The Museum is a must see, it also had a lot of stuff on the abolition of slavery, and Lincoln which again was very interested. We left the museum and wondered back into the town. We had agreed to meet Kathy and her Husband at 5 o’clock for the fireman’s dinner. Which was a annual dinner to help raise funds for the local fire station.

We met John and went and ate our dinner, which consisted of gorgeous succulent steak, lovely buttery mashed potato and  locally farmed sweetcorn, it wasn’t just dinner, it was the fireman’s dinner.

We then joined up with Kathy at the friends church for hymns and (more importantly) free pie. We boomed out the hymns really hitting each note with British pride. I didn’t have a clue what I was singing, and didn’t recognize any of the songs, until Smack my bitch up started, no I joke it was Amazing Grace. So when this tune started on the old Joanna, Kieran and I took it upon ourselves to take it to the next level, barbershop style. Kieran rocked the baritone while i kicked out the tenor. Safe to say we got a standing ovation.

We then went into the basement of the church for our free pie. We met some lovely people. We chatted to one lady for over an hour, unfortunately we didn’t get her name, she had travelled the country herself. She had a lot of advice for us.

We then did what any other person in our position would do, we went up for seconds. We approached the church helpers hesitantly, before we held our empty plates out “Please sir, I want some more.” The helper eyed up our plate before saying “ Moooooooooooooooooore?…….Yes that fine.”

Home made pie was delicious, and the company we kept was even better. Once we where finished we walked back to Kathy’s to watch the evening’s fireworks display together on her lawn.

We then packed our things up ready to get on the road the next day. We had really enjoyed our stay, Kathy had been an amazing host, and West Branch was a beautiful and interesting little town. 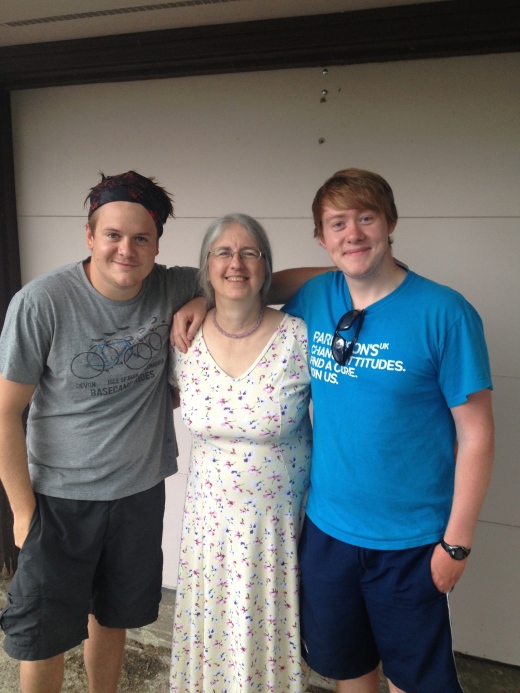 The next morning we got on the road early and biked through Iowa City, which is a large college town, and home of the Iowa Hawkeyes, one of the big 10 American football college teams. Which is a big deal here.

It was a cool city, which I’m sure would have been even better when college was in. Unfortunately it was very quiet while we where there. So we didn’t get to the see the city in its true light.

We rode on; our next big stop was Des Moines. It was a long ride untill then. We hoped the state would flatten out before then, but unfortunately we where wrong. Hill after Hill after Hill.

We met a few other people along our way before we got to Des Moines, we stayed with Bruce Ashton in Marengo, who we met in a bar in town. Then we slept in a baseball dugout in Brooklyn.

We then stayed with Suzanne and Daniel in Newton. We met these two through the Warm Showers website, they had a lovely home, and made us feel very welcome, buying us a beautiful Mexican dinner, and Daniel took us out with his friends.

When we woke up we planned on making it to Des Moines, it was a long push, another day full of hills, and plenty of stops.

Being on bikes has its ups and downs, literally, but we are very proud of our progress, as you know we are writing these blogs retrospectively, and at this point we have finished our ride through Iowa, which is over 350 miles. We have slept rough now countless times, we have laughed a lot, cried together, but we are doing it all for a reason that give us more determination, and fight than we ever imagined.

After Kieran’s injury we racked our brains on how we could finish this and still feel we have accomplished something worth sponsoring, and after biking more than 400 miles we believe what we are doing still is worthy of your support, we hope you agree.

Any whom, Kieran will continue and tell you more about our trip across Iowa. Please keep up the support, its has been priceless so far, and please keep sponsoring , the link to the page is below.