So by now anyone who actually reads this blog, or follows the Facebook page will know that, due to my own feet injuries (some walk related, some through my own stupidity), we are now cycling the remaining 2000 miles to Santa Monica, California.

We picked back up on the Illinois and Michigan Canal trail, just south of Chicago. Where we joined it was not far from where we had left off, in Joliet. The first person we met told us “you boys are in over your heads”. He continued to tell us how it was a terrible, terrible area filled with gang-bangers and murderers; as usual we neither saw nor got any impression of the above being true. It wasn’t the nicest of places, but it seemed the same story as many places we had come across previously: a town that used to centre around an industry that had since moved to a country with a cheaper work force. We didn’t have to walk through it for long before we were back into the countryside, walking along the trail.

The Illinois and Michigan canal trail

After having such an amazing and luxurious rest you’d think that being back on the trail would be all gravy. wrong. my feet didn’t seem to be in any different type of state. At the end of the first day we had only walked 12 miles, which I’m sure you can figure out is less than we would previously walk before lunch; not a good sign. Did I mention that the day we had started back on the trail happened to be my birthday? no? Well, the day we started back on the trail, the day walking 12 miles caused me excruciating pain, the day I broke down in tears (second time so far) and told Jack I didn’t think I could complete the walk – that day was my birthday. We sat on a bench in silence.

Corn, Clouds and Church – The midwest

Us with the unfairly named “rip-off” Roy

Bikes it is then. A quick look at Google maps (thanks again to Dave Wilson and the Lagana’s(we’d be lost without the phone)) showed us there was a bike shop 8 miles away, so that was as far as we’d have to walk the next day.

The Grand Schwinn Cyclery just happened to be the only bike shop for about 60 miles in any direction,  and its owner, Roy, sized us instantly and was able to tell us exactly what bikes we’d be needing. I say instantly, we ended up spending nearly four hours in the shop, but it gave us plenty of time to charge all of our equipment. Roy sorted us out with 2 identical bikes, padlock, road flag, spare inner tubes, and he sorted out the wheels on our cart for us. We’d later go to a bar about 10 miles down the road to have a late birthday drink, and be told by more than a few people that we had encountered “Rip-off” Roy. I’ve got to say I think this was a fully undeserved nickname, seeing as he threw so much free stuff in and even gave us a discount.

Despite my original apologies, I don’t think either of us could be any happier with being on bikes. Not only was it not causing me any pain to peddle, we were also covering a hell of a lot more ground than we usually did on foot. Cycling along the canal was so much fun too. It makes so much difference when you aren’t having to contend with cars, but we quickly learned that the type of surface your on makes the biggest difference of all. Riding the 100 miles along that canal was broken up into chunks of: elation at 12mph(tarmac cycle paths), happiness at 8mph (oil and chip), and devastation at 3 mph(loosely packed gravel).

The biggest difference that has come with the bikes is that we no longer get to meet as many people, or stay in as many amazing home; but that’s exactly how we expected the walk to go from the start. We had never spent two consecutive nights in the tent before Chicago, but after the bikes it was 6 straight nights before we got an amazing offer to stay with someone. Staying in the tent isn’t a problem at all, and I cant speak for Jack, but I really enjoy roughing it. The only downside is when we have a rainy night that continues all morning. obviously it’s not ideal to put the tent away still wet, but we’ve always been able to air it out at some ones house; this particular morning there was a torrential downpour and no real chance of a place to stay that night. we bundled all of the stuff into our carts and pedaled as quickly as we could to a storm drain a quarter of a mile away. we hung the tent as best we could, then spent the next two hours shaking it, trying to get it dry. Had we known the (sort of) good fortune that lay ahead of us,we needn’t have bothered.

I must mention at this point that it was now Tuesday and neither of us had showered since Thursday morning when we left the Waldorf Astoria. So when we were cycling on a closed road and passed by an unused outdoor swimming pool, we saw an opportunity, and we took it. There was no water in the swimming pool so we tried all of the doors to the changing rooms – no luck. We started to walk away when we saw a hose reel next to a portaloo round the back.  I’m not ashamed to say that while one kept an eye out for passers by, the other had an alfresco shower. Hopefully the only time I’ll ever be naked so close to a playground. Anyway…

At the end of the day there was a large private campsite/RV park, who we had been told were pretty unsympathetic towards charity cases, and charged a (frankly disgusting) $22 to pitch a tent. We walked in, paid our money and at the last minute, Jack pleaded our case. The woman behind the desk seemed to take pity on us and said we could have one of the $50 cabins at no extra charge. Result! the cabin was really basic, but it was a bed each, a roof over our heads, and the opportunity to have the first real shower in nearly a week. 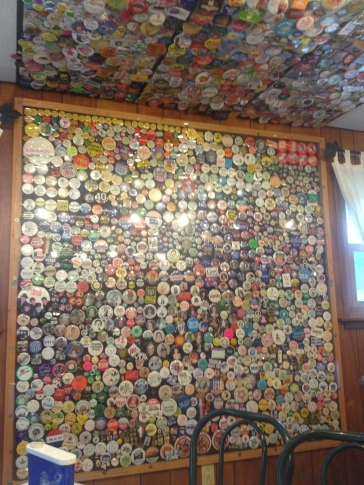 A campsite that doesn’t like charity, but LOVES badges

As i headed back to the cabin a guy was stood beside a bike, looking like he’d cycled a few thousand miles. we got chatting and it turned out he was cycling coast to coast too, but from Seattle to NYC. Like us he didn’t seem too enamored with the price of a pitch and was going to head a few more miles down the road. I told him that we still had one spare bunk in the cabin which he was welcome to; he was incredibly grateful but did warn us he had been known to snore (he did warn us). After we chatted about each others journeys, where we’d been and what we’d seen, Jacob told us about a service called WarmShowers. Much like CouchSurfer but for, you guessed it, showers. He said it was specifically for bikers to get a place to wash, but more often than not he had been cooked dinner and invited to stay for the evening. We downloaded the app straight away and found a guy who was willing to let us crash at his the following evening in Davenport, Iowa.

Seeing as it was the first bed we had seen for a while, Jack and I were ready to crash out; Jacob had other plans. I snore, my brother snores, my dad snores, children scream, dogs bark, bears roar! None of this compares to Jacobs snoring, nor would it wake him. He fell asleep and started snoring instantly. We put up with it for about 20 minutes, then Jack and I looked at each other and started laughing. We quickly went through a range of emotions, then Jack decided the best solution for him was to wrap his head in clothes so he couldn’t hear it anymore; no luck. I couldn’t take it anymore. I shouted his name five or six times, nothing. I flicked the light on and off whilst shouting, nothing. I left the light on, shook Jacob whilst shouting his name, nothing. it wasn’t until i did all of this as well as slapping him on the forehead that he began to stir. When he came to, he apologized profusely and agreed to try sleeping on his side (it probably doesn’t help that he wears ear plugs to stop himself from waking up). Despite a few random snores during the night,we managed to sleep loosely until morning. We said goodbye to Jacob the next morning, with Jack warning him that the girl hes headed to meet in NYC probably wont put up with that noise for too long.

When we used to contemplate the days walk ahead of us, I rarely remember either of us seeming excited, but these days we are genuinely anxious to get going each morning. Even more so that  day because we knew that we would be crossing the Mississippi into Iowa that afternoon. The whole day went without a problem, we peddled hard and fast, excited to make it to the river as soon as possible. It had only been a week on the bikes but we both agreed that was by far our favorite day of riding; it was beautifully sunny, but not too hot, there was a breeze but it didn’t slow us down, and we knew that we had a real bed in a real house that evening. 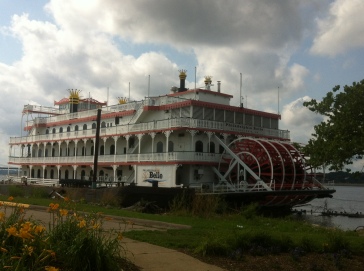 We both got really excited when we saw the Mississippi river! It had never been a milestone in our heads, but as we approached it we were both punching the air and cheering. This only made me more excited for what its going to feel like when we do eventually reach Santa Monica. After stopping to revel in just how far we had come and to take a photo of the teddy, we carried on down to the Centennial bridge where we could officially cross the Mississippi and the state border into Iowa. As we crossed over to the other side there was a guy who seemed to be waiting for someone. That guy was Dustin, and the someone was us.

A huge milestone, for us

Dustin was from WarmShowers and had been kind enough to let us stay with him for the evening. He’s a graphic designer and his home is an amazing work/living space above a newspaper office. his walls are covered in amazing art work, all of which (i think) he had done himself. We headed out for dinner and chatted about WarmShowers and how many people Dustin had had to stay with him (a lot) almost all nice, some very strange. We obviously told him all about our almost identical experiences with CouchSurfer. When we got home that night he showed us his photos of riding his floating bike through rivers, taking it out in the deep snow, and the album of every cyclist that has stayed with him. Somebody commented on our photo that we were “the first HOT guests, somebody with great taste. 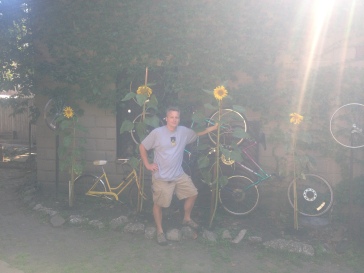 Dustin with his sunflowers

Well i think I’m nearly caught up on the backlog of blog updates, but unfortunately seeing as we’re now camping more often the entries will have to be fewer and further between.

From a distance this looked a lot like a puddle 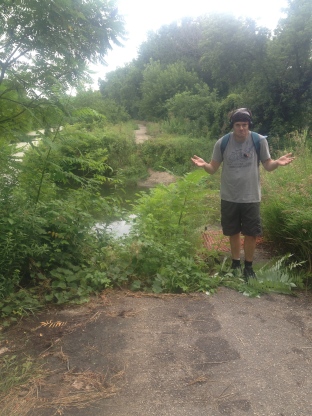 Sometimes the trail just disappears, we found a way around it

One thought on “On yer bike!”